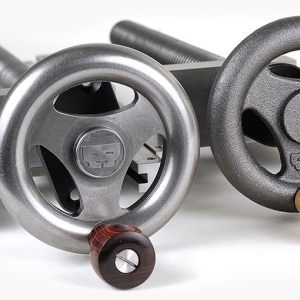 Clamping work to a bench surface between dogs is a very old technique. The historical record gives us examples as far back as the Roman era, but most woodworkers know the tail vise from the modern Scandanavian and German tradition. The oldest detailed drawings we have are from the early 16th century by German author Martin Löffelholz.

The vise uses a pair of either wooden or metal dogs, one of which remains stationary, and one of which moves to pinch work of varying length between them. The simpler of the two vises is often referred to as a wagon vise since the moving dog travels in a block trapped within the bench top and rides along a pair of rails, like a wagon or cart. It is this type that our design is based on.

Unlike other tail vises, the Benchcrafted Tail Vise utilizes a moving dog block and nut, and a stationary screw. The dog block rides alongside the screw to allow nearly the full length of the screw to be utilized. The benefit here is that the screw remains in the same position at all times, never protruding past the end of the bench. The left-hand thread, precision-rolled acme screw provides for typical rotation when operating the vise. Operating the vise is intuitive.

"Moving-block" tail vises have some disadvantages that limit the usefulness of this area of the bench. Mallet work, such as mortising or chopping dovetails over the vise can damage the mechanism over a short time. The vise is also prone to sagging with use and wear, which causes all sorts of problems for clamping between dogs. Once the vise starts to sag, often it will raise up above the surface of the bench when tightening, raising up the workpiece with it. This can cause hand plane chatter among other issues. The same type of vise also protrudes past the end of the bench as its opened. One advantage the traditional tail vise has over the wagon vise is the open-front jaws. However, the large gap of the open jaws can make for a large unsupported area below workpieces, and this can cause some problems when planing, especially with shorter pieces. Wagon-type vises solve almost all of the problems of traditional tail vises. The area of the bench around the vise can be used in the same way as the rest of the bench. The vise can't sag. The screw doesn't extend past the end of the bench when the vise is opened, making this vise a great choice for cramped shops. The dog block also cannot raise up when tightened. The area around the vise will always remain as flat as the rest of the bench, since the "moving block" section of the traditional tail vise is eliminated. The Benchcrafted Tail Vise is also much easier to install than traditional tail vises, since it eliminates the task of building the complex wood superstructure around the vise hardware. The significant advantages of the wagon vise more than make up for the lack of the open-front jaws of the traditional "moving-block" tail vise.

Tail Vises Versus Nothing

In the search for the ultimate bench (it doesn't exist) one is likely to encounter discussion of going entirely without a tail vise. And indeed, our own Classic bench does not use one. However, unless one is a die-hard traditionalist, or worked for years without a tail vise (it's impossible to miss something unexperienced) the question arises, what disadvantages does a Benchcrafted Tail Vise have? And the answer is, none. Although a bench build will take a bit more time (perhaps an extra day of construction) including a Benchcrafted Tail Vise in your bench offers nothing but advantages. Planing stops, often cited as a replacement for a tail vise, as some of the functions do overlap, can be used to best effect alongside a bench equipped with a tail vise.

Clamping between dogs is the main job of any tail vise, and the Benchcrafted Tail Vise excels at this task. The handwheel allows one to adjust the vise much faster than a typical T-handle. The momentum of the cast iron wheel allows you to rapidly spin the dog block into position via the ergonomic wooden knob. Grasping the rim of the wheel allows precise, controlled pressure to be exerted when approaching final position.

Vertical clamping between vise jaws can be easily accomplished with the Tail Vise, and when lined with the included Crubber, the grip is tenacious. This is an ideal vise for working the ends of smaller boards. The vise, when installed at its maximum capacity and using a 5" long dog block, is capable of handling an 11-3/4" wide board. Maximum travel is 12-1/4" using a 2-7/8" end cap. These capacities vary slightly depending on installation.

In addition to building a new bench around the vise, the The Tail Vise can also be retrofit to existing benches without existing tail vises, or to benches with traditional, moving-block style tail vises. See our FAQ for more specific info. We're also available for consultation via email, free of charge, if you're considering installing our Tail Vise into your existing bench