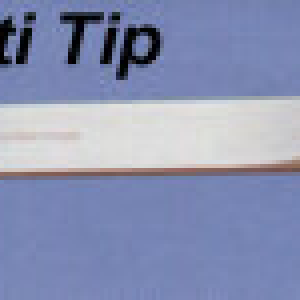 Stock: Out Of Stock

he Robert Sorby Multi-Tip Hollowing Tool has been described as one of the most versatile tools around.

A must have in every turners tool kit. The exclusive Robert Sorby Multi-Tip Tool (RS200KT) features a massive half-round shank and interchangeable tips which combine to offer the turne a variety of different opportunities:

For Hollowing: There are two HSS hollowing tips which can be used along with the swivel assembly. The first (RS212C) which incorporates an angle of just under 90 degrees is ideal for the initial rapid opening up of an aperture and for creating a crisp corner in the base of boxes. The second tip (RS211C) is more suitable for producing a sweeping curve in the bottom of vases or other hollow forms. The opposite end of each tip has been left deliberately blank for the turner to shape as he pleases. By offsetting the cutter, this tool then enables the turner to under-cut under rims of bowls. Unlike other hollowing systems, it is used with the flat section on the tool rest. This eliminates all the rocking and rolling normally associated with hollowing and puts the turner firmly in control. This is one of the most effective, economical hollowing systems around.

For Scraping: By fitting the HSS tear drop shaped cutter (RS200C), this tool suddenly becomes a multi-faceted scraper. The shape of the scraper cutter converts the tool into a round, half-round or square scraper suitable for use on the inside and outside of bowls, platters and hollow forms. With the flat surface of the shank on the tool rest, scraping is in conventional mode. By turning the tool round, with the half-round section of the shank at 45 degrees on the tool rest, it becomes a highly efficient shear scraper giving fine shavings and a highly polished finish.