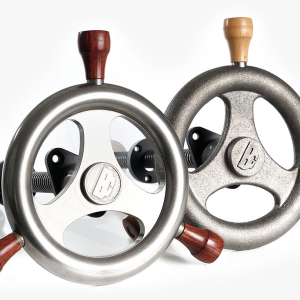 Before the industrial revolution the wooden leg vice was king. Once mass-production processes became commonplace, vice designs started to change. The leg vice was brushed aside and the cast-iron bolt-on vice took hold. They have their place, but the leg vice is superior in every way. When Benchcrafted set out to design and manufacture the Glide, they wanted to capture the best aspects of traditional leg vices and mingle them with modern precision manufacturing capabilities to make a vice that has all the benefits of the old-world designs along with those of the 21st century.

Leg vices offer greater work holding capabilities than iron vices. Without the two guide rods of the iron vice, workpieces can be held right up against the screw, virtually eliminating racking and providing a better overall grip. Iron face vices provide around 100mm of workable depth from the top of the bench to the screw and guide rods. Leg vices are usually more than double this, around 230mm. Leg vices are also more powerful due to the large lever provided by the lower position of the fulcrum. Leg vices are also simpler and easier to maintain than iron vices. The auxiliary wood jaws necessary for iron vices are unnecessary with a leg vice since the vice itself, along with the bench's leg and top, forms the jaws of the vice. This also means you can build the vice in your own style, using wood of your own choosing. The leg vice is not only functionally excellent, but also aesthetically pleasing.

The Glide makes holding your work quick, easy, and pleasurable. It uses a clever combination of components to deliver incredible clamping force with minimal effort. The Glide exemplifies our principle of effortless workholding.

Traditional leg vises use a sliding "tommy bar" to operate the vise. This style of handle offers one distinct advantage: lots of leverage. We've engineered the Glide to deliver rock-solid workholding without the need for the big lever of a tommy bar. The massive handwheel allows you to operate the vise with minimal effort and speed. Acting like a flywheel, the handwheel turns the screw and allows you to rapidly adjust the vise with a quick spin. You can open the vise to full capacity (typically 9") in about 4 seconds. Closing it is just as quick and easy. With three knobs oriented at 120 degrees around the wheel's perimeter, there will always be a knob between the 10:00 and 2:00 position. This makes for very convenient operation. Grabbing a knob and rotating from 2:00 to 10:00 (1/3 revolution) moves the chop over 1/8"; more than enough to remove your workpiece. Operating the vise is fun. Giving the handwheel a healthy spin opens the jaw wider and more quickly (use one of the knobs, or grasp the rim itself) and closing the vise from this position with another healthy spin closes the vise rapidly against your workpiece. In most cases, further tightening of the vise is unnecessary.

We offer two versions of the vise. The Glide M and the Glide C. The Glide M features a refined, fully-machined cast iron handwheel with durable, acrylic-infused Dymondwood knobs. With a more traditional look and lower cost, the Glide C features a sand-cast iron handwheel with acrylic-infused beechwood knobs. The natural texture of the sand mold is present on the finished handwheel. All other components of the Glide M and C are identical.

The heart of the Glide is a rolled-thread double-lead acme screw. At four turns per inch, the screw opens and closes the chop 1/2" per revolution of the handwheel, twice as fast as typical metal vise screws. Roll threading creates a hardened, polished thread for smooth action, and consolidates the molecular structure for durability, unlike screws with cut threads. We turn our nuts from solid billets of steel and tap them to work sweetly with the Glide's screw.

The Benchcrafted Crisscross mechanism is an integral part of the Glide.The mass and free spinning action of the handwheel are provided with unencumbered movement over the vise's entire range by the Crisscross, which completely supports the weight of the chop and Glide components. Additionally, the Crisscross completely eliminates the traditional wooden parallel guide and its adjustment pin. The Crisscross is maintenance free. Once you install it properly, there are no adjustments to make. Ever