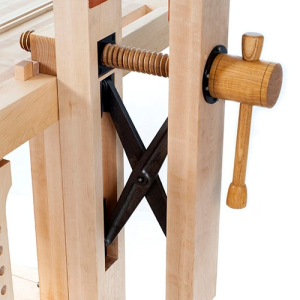 A popular mechanism for maintaining parallelism in vise jaws began to surface in the American patent record in the mid 19th century. There are also examples of this mechanism published in the La Forge Royale catalog, Paris, late 19th to early 20th c.

This mechanism features two castings, equal in length and joined in the middle to create a pivot. The upper ends of the arms are fastened to the bench's leg and the chop and are free to rotate on their mounts.The resulting mechanism completely eliminates the need for a traditional parallel-guide and pin arrangement.

Although the mechanism was never given a specific name, in modern times it has become known as the "St. Peter's Cross", a name taken from an early 20th c. publication describing it as such. During the development stages, we found several extant examples of the St. Peter's Cross, and used them to prototype our version, the Benchcrafted Crisscross.

The Crisscross completely transforms any leg vise into an effortless experience. Fully supporting the weight of the chop, the vise hardware, and its own weight, the Crisscross floats in and out on steel pins and bearing plates, giving a virtually weightless, friction-free action to the vise. The mechanism automatically adjusts through the range of your vise's capacity to any workpiece thickness.

Both our Glide and Classic Leg Vise come equipped with a Crisscross, but you can purchase a Crisscross separately to pair with any leg vise hardware you wish, including inexpensive imported bench screws, to finely crafted all-wood leg vise hardware. Both work perfectly with the Crisscross. Wood screws have the distinct advantage of speed with their fast pitch, and when matched with the action of a Crisscross the result is fantastic. Quick, easy adjustments and the classic look of wood.

The Crisscross can be installed into new benches, or retro-fit to benches with existing, parallel-guide equipped leg vises. It can also be used to build accessory vises with any vise hardware, such as a full-size high leg vise for detail work.

We offer the Crisscross two ways. Both function identically. The arms in both the Solo and Retro are identical. The difference is only in how you install each version into your bench. If the information below doesn't suffice, please read through the Crisscross installation instructions below which clearly show how each version installs.

The Crisscross Solo attaches to the bench's leg and chop with two 3/8" steel mounting pins drilled through the sides of the leg and chop. These potentially deep holes (depending on how wide your leg and chop are) are most accurately drilled using a drill press, so choose this model if you're building a new bench, and can work on the bench leg at the drill press.

You can of course install a Solo into an assembled bench, you'll just have to figure out how to drill the long hole into the side of the bench leg.

The Crisscross Retro doesn't use the 3/8" steel mounting pins. Instead, it features two cast iron brackets which hold short, steel pivot pins. The Retro bracket fastens to the bottom of the Crisscross mortise, so you don't need to drill any holes for pivot pins with the Retro, which makes it a better choice if you're retrofitting a bench with a Crisscross.

You can also use the Retro in a new bench, even if you have access to a drill press, if you'd prefer the installation method of the Retro